You are here: Home / Erythromycin Tablets 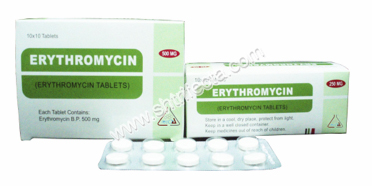 Erythromycin Tablets
Product information:Erythromycin is a macrolide antibiotic that has an antimicrobial spectrum similar to or slightly wider than that of penicillin, and is often prescribed for people who have an allergy to penicillins. For respiratory tract infections, it has better coverage of atypical organisms, including Mycoplasma and legionellosis.and it is today commonly known as EES (erythromycin ethylsuccinate, an ester prodrug that is commonly administered). It is also occasionally used as a prokinetic agent.
In structure, this macrocyclic compound contains a 14-membered lactonering with ten asymmetric centers and two sugars (L-cladinose andD-desosamine), making it a compound very difficult to produce via synthetic methods.
Erythromycin is produced from a strain of the actinomycete

Product Packaging – The dosages available for this product are:
Erythromycin Tablets 500mg
It is packed in 10 tablets / blister, 10 blisters / box, or according to customer requirements.