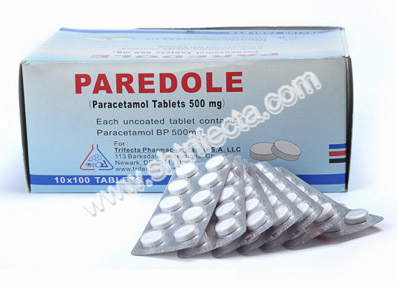 Paracetamol (Acetaminophen) Tablets
Product Information: Paracetamol is a widely used over-the-counter analgesic (pain reliever) and antipyretic (fever reducer).
It is commonly used for the relief of headaches, and other minor aches and pains, and is a major ingredient in numerous cold and flu remedies. In combination with opioid analgesics, paracetamol can also be used in the management of more severe pain (such as in advanced cancer).
Paracetamol is part of the class of drugs known as “aniline analgesics”; it is the only such drug still in use today. It is the active metabolite of phenacetin, once popular as an analgesic and antipyretic in its own right, but unlike phenacetin and its combinations, paracetamol is not considered to be carcinogenic at therapeutic doses.